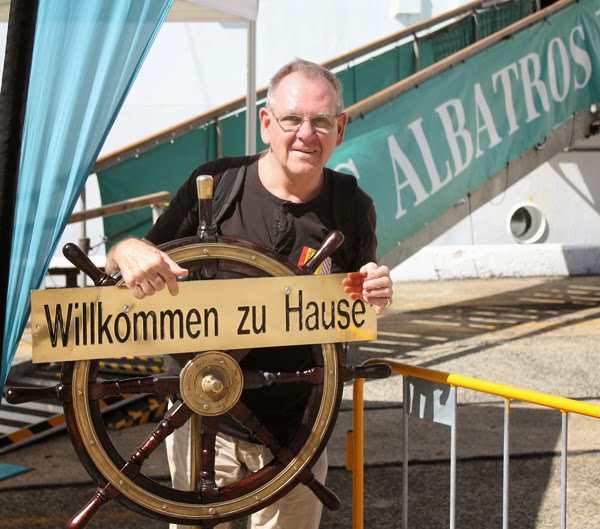 Heike is on a cruise ship called Albatross. She flew from Berlin to New Zealand to pick up the ship. It is mainly occupied by elderly German ladies and gentlemen. The four week cruise will take them along the Australian coast in a northerly direction with about six stops.

The cruise will take them into Indonesia, South Korea and end in Shanghai in China. It was Heike’s second cruise taking in Sydney. The first was seven years ago so she knew something of the layout and the main tourist attractions.

I told Colin about her visit so we arranged to meet her. We had to send passport details etc so she could inform the security people. We got there at the agreed time this morning and had to wait. The security services between the ship and the state had not got their act together. After I told a security officer it was bad management and organisation we were soon allowed on board! 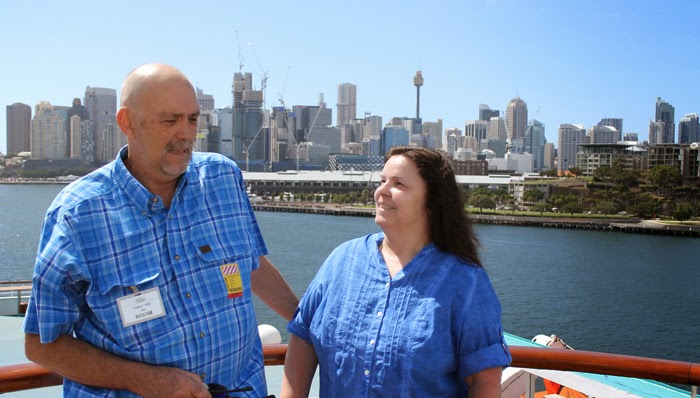 I have never been on a cruise ship before. Sister P and husband L now go on such cruises at least once a year, as does cousin B and wife P, but I have never been on one or put it on my ‘Must Do’ list. Even so I can understand why people regularly go on such cruises. It is a way of seeing the world but with security and a sense of familiarity around them in terms of language and services offered.

We had coffee and a chat. Then I found a piano in a lounge so I entertained the guests who had remained on board. Perhaps I should get a job playing the piano on a ship and sailing the world until I can play no more! I’ll think about that one. 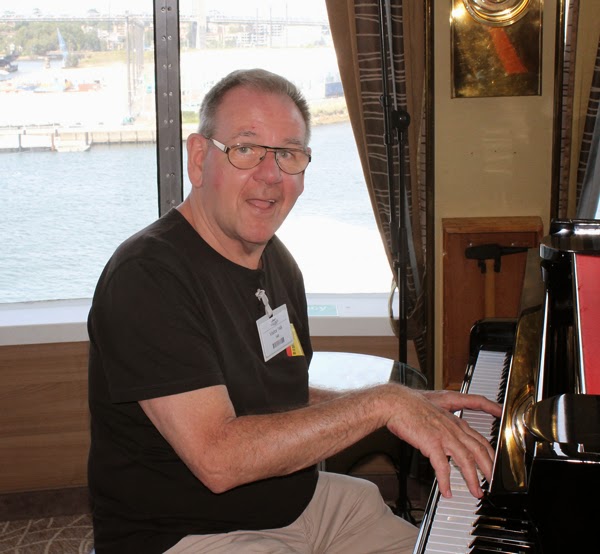 We disembarked (what a nice word!), jumped onto a relay bus and ended in the centre at George Street.  Heike wanted to buy a hat to protect her from the sun so we set off and found one. Next she bought postcards/stamps she needed then changed money in a bank and all while we wandered towards the old part of town.

Colin knows the history of this place like an expert and it was interesting listening to his tales of people and places in days goneth-byeth! I learnt a lot. We ended up in Sydney’s Oldest Pub. They have a restaurant upstairs so we had a meal there. Believe it or not but we were served by a young waitress who had moved to Sydney from Dundee in Scotland! I can understand why 🙂

A nice relaxing lunch with another variety of beer recommended by Colin and then another walk around the original settlement/convict/prison area. It was humid and I noticed Heike was starting to feel the heat and strain of walking so we agreed to return to her relay bus. Tomorrow she has a full session in a guided tour including visiting the inside of the opera house.

Have a great time Heike and thanks to you and Colin for such a memorable day. Here are a few photos to remind you/us of a special day.