I got this photo yesterday from Jan while I was watching FC Bayern play Hamburg on TV. Bayern won, but then most of their players are in the German National Team. It was nice to see Philip Lahm playing again after he captained them to victory in the World Championship this summer. 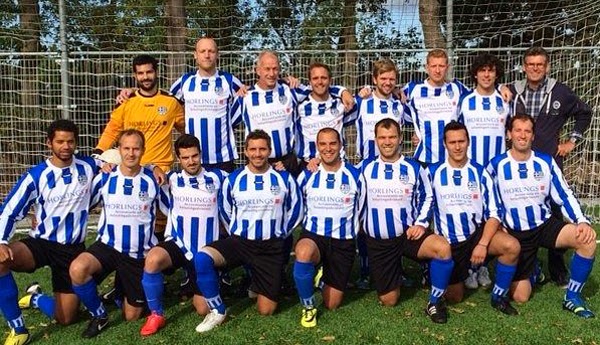 It was the first photo of Jan in a football team for more years than I like to remember! Jan has always played football and I remember seeing him play when he was 10 and I supported his MSV team as he got older.

I remember taking him to the Bateson family where he immediately felt at home partly because the ‘lads’ quickly recognised his football skills. So you Batesons, what do you think about this photo and can you see where he is?

I remember later when he stayed with Shirley in Florida that he played in a school team. Do you remember this Shirley?  A few years later he went to The University of Rhode Island to study for his MSc. I flew over and remember watching him play football in his local team. I think they won when I was there!

On his return he played in different teams and is still playing in Den Haag — but then Arancha also plays in a women’s football team. Keep playing both of you! How about a photo of you, Jan, with your team after the match sinking a few beers. Don’t tell me you don’t do this :-))