Last week saw the end of the trees in the area in front of my flat. Sad! I miss them already. The counter argument is that the land is needed for new flats and that trees will be planted in the garden after the flats have been built.

Okay, I can understand that but I still miss my trees. It will take ages for the new trees to grow and I won’t be around to see them as mature trees. Even so, I noticed that there were two pairs of workmen who chopped the trees down.

The first pair removed all the smaller trees and bushes. These was put into a machine and made into wood pulp. Nothing happened for over a week. Then another couple of lumberjacks arrived. This was the ‘heavy gang’ to tackle the big, older trees. 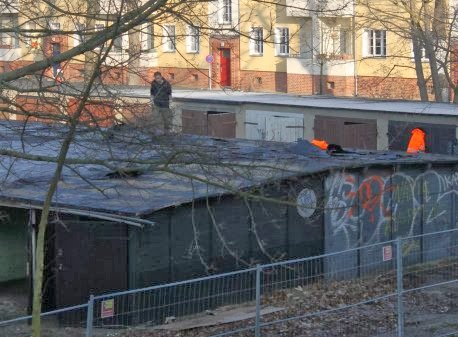 They arrived in the middle of last week. I noticed all the climbing tackle and saws one of them had. He turned out to be the ‘Master’. The Hausmeister later told me he was a specialist and came from England! I watched in amazement as he climbed the huge trees like a monkey, and cut them down starting with the small branches at the top.

At the same time, the garages were knocked down. After all the trees were cut dowm and the garages removed , it was the turn of a building containing six flats. This had to be demolished to make way for the new buildings.