I told you I went to the Philharmonie yesterday afternoon to hear/watch Mahler’s 5th Symphony. I said I would give more information so here it is. 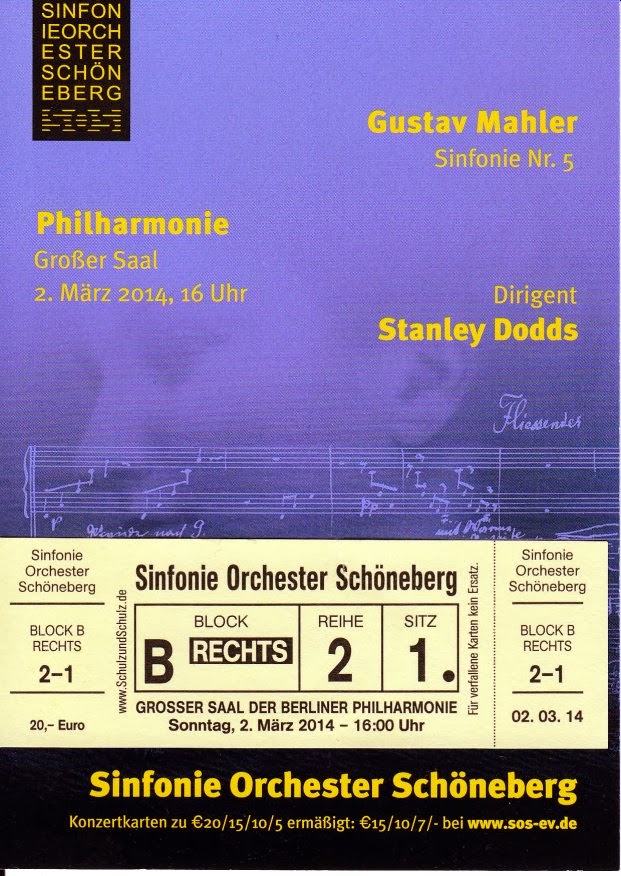 Mahler wrote the first three sections of his 5th Symphony between spring and autumn in 1901. He was born 7 July 1860 as the second of twelve children. That made him 40 when he started the symphony.  He was born a Jew but became a Roman Catholic in 1897. This was just after taking up the post of principle conductor of the Vienna  State Orchestra.  The religious change was largely a political decision.

In 1902, he married a non-Jewish lady called Alma Schindler. He met her at a reception on 7 November 1901. The 4th movement of the 5th symphony is his declaration of love for Alma. It is in sharp contrast to other movements in the symphony.  An interesting and tempestuous relationship followed which you can hear in his later music.  Seventy years later the Adagio was made famous when it was included in Visconti’s film ‘Death in Venice’, based on Thomas Mann’s book.
Symphonies 5,6,7 were composed in the relatively short time from 1901 to 1905. They are instrumental. There are no choirs or individual singers, unlike his earlier works.  Symphonies 5 and 6 are similar. Both start with a funeral march and end in a vast finale of variation form. Both lack any proper slow movement and both have a fantastic scherzo.

Both show a deeply rising emotional temperature. They start in the gloom of a funeral march and rise to end in the glory of jubilant, hymn like harmony, like a blaze of bright sunshine.  If you are interested to learn more and enjoy Mahler’s symphonies, then do a little reading and listen carefully.