Last Wednesday I went to Potsdam with Oldie Hermann. If you remember, he has recently had a heart operation and I posted about it to this blog. All went better than I or his family thought after the operation. His doctors told him to move around and walk to active his heart and get it properly moving. One such therapy was to spend the afternoon walking in the old part of Potsdam, and later to Sansoucci and the New Palace. He did very well and only needed to stop for deep breaths a few times.

The main attraction was to see the recently opened Landtag Brandenburg. This is the building in which the parliament of the state of Brandenburg takes place. It has an interesting history. Let me try to take you through the main points so you can learn a little more about this part of what is now Germany.

Kurfürst Friedrich Wilhelm von Brandenburg inherited the town of Potsdam in 1660 to add to his other territories. Shortly after he asked the architect Johann Gregor Memhardt to design and build a palace, in the Holland style,  in the central area near the river. It was duly built in 1664 – 1669.

In 1740, Friedrich II of Brandenburg became King of Prussia and decided to expand Potsdam as his ‘residence town’. In 1745, he asked architect Georg von Kobelsdorff to redesign the palace. This was done and so it stood until destroyed in an air raid on 14 April 1945. Knobelsdorff’s design formed the basis for rebuilding. Its function was not as a palace but to house the parliament of Brandenburg. 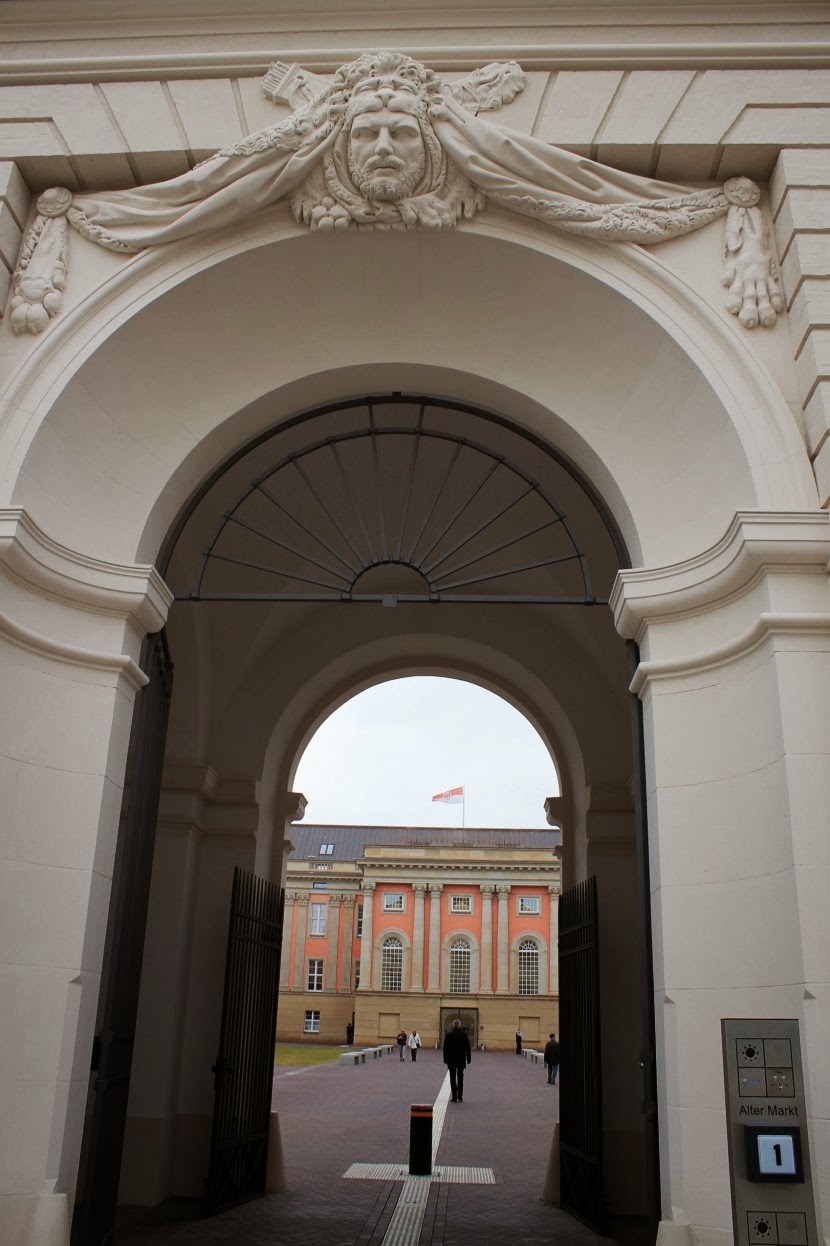 The building changed function at the end of WW I in 1918. The new German Republic used it to house government officials, for meetings and receptions. Even as a ruin in 1945, the Sclosscellar underneath remained intact and was used as a dining room for school children in the 1950s. It was not to be for long.

In 1959-60, the ruins were removed and used to build the foundations for the ‘Lustgarten’. The empty area was used as a centre for traffic. Things began to change after reunification in 1989-90. In 1990, Potsdam city council decided that any rebuilding in the centre would have to focus on restoring it to pre-1945. In 1999, a foundation was created to promote the restoration of the town centre.

In May 2005, Brandenburg Parliament decided to build a new parliament building on the site of the old Potsdamer Stadtschloss. In September 2009, a contract was signed and building started. It was partly financed by a donation of €20 million from a charitable foundation. More money followed in 2011 to complete building.

In December 2013, MPs and officials moved in and parts of the building were declared open to the public. It is worth a visit the next time you are in Potsdam.