I’m enjoying a really nice lazy weekend, and the sun is shining in almost clear blue sky. Last week was a very mixed one. It was dominated by worries about Hermann’s heart operation, and visits to the hospital. I was there on Friday and he looked much better. The docs want him to walk/move about with lots of deep breathing. He is more than happy to oblige! 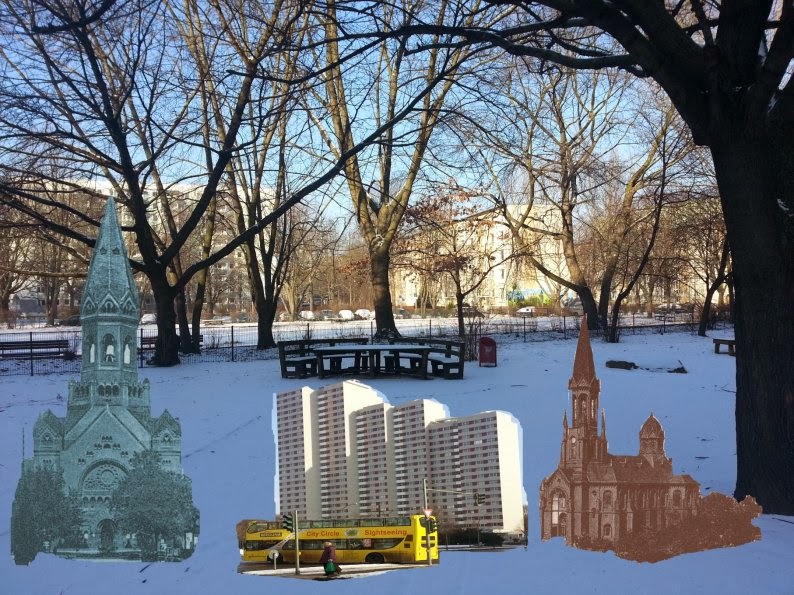 I’m listing to BBC Radio 3 (Classical Music)  over my internet radio. Micheal Berkeley’s Private Passions programme. His guest is the ‘beat poet’ Michael Horovitz. Really amazing person. He is 78 and uses his voice like a musical instrument. His choice of poems and music is truly interesting, as is hearing about his childhood. Escaped from Germany to England in 1937, talked about learning English and helping his elder siblings to learn the language. He was the youngest of ten children. He has just said that his parents had clearly never heard of condoms 🙂

Last Friday, I showed Stefan and the Photoshop Gang my new-old Smartphone. There was some surprise that I was entering this techi-world at my age! Stefan agreed to teach me more in a Smart
lesson before we start next Friday. Meanwhile, I am practicing how to use different functions.

We also did more work on photos of Berlin on the theme of Old and New. I practiced cutting out and moving images then duplication. I put some old churches into a kids playground so they could practice demolishing them 🙂 I also added  snowmen to the main approach road to Alexander Platz, which is in the middle distance of the photo. Not very artistic, but part of the practice/learning process.

Jan is in town. Actually south of Berlin. There is a meeting of the ‘lads’ from his class. They are all now 30 years of age so decided to have a special meeting to see how many times they could multiply 30. I can imagine that a not small quantity of beer was consumed! Great that they still keep in touch.

No news from Marcel for two weeks so I have just called him. I got a very sleepy, ‘Hello’. He’s going to call me back after he has finished sleeping. He has a ‘student-job’. This one is washing-up in a restaurant or helping in food preparation. He works until 1.00am so you can understand why he is still asleep early afternoon. Looking forward to catching up on his news.

I’ve done my lesson prep for next week, the ironing, prepared food to cook later, made a fruit salad and updated the security on my hotmail account. I got a scam/virus this week from someone on my ‘trusted sender’ list. I am thinking of removing his name! Caused me a lot of problems and I nearly lost the account. Next week looks to be even more varied and busier than last week. Hope your next week is a good one.