Quick responses to my post about the Rotes Rathaus asking for more information for non-Berliners who read this blog. Okay, happy to oblige. Remember that you can always leave a comment on the blog page. You don’t have to call, or e-mail me, to contribute.

Let’s start with an image of the main entrance to the building. You can clearly see the redbrick construction and, if you have been to Italy, its likeness to some public buildings there. The foundation stone was laid in 1860, the topping-out ceremony was in 1867 and the building was occupied in 1869.

Then followed the Franco-Prussian War leading to the creation of Germany in 1871. In that year it became the official seat of the Mayor of Berlin, and Berlin became the capital of Germany. Many people either do not know, or forget, that Germany is a relatively new state. It still retains strong regional diversity and dialects. 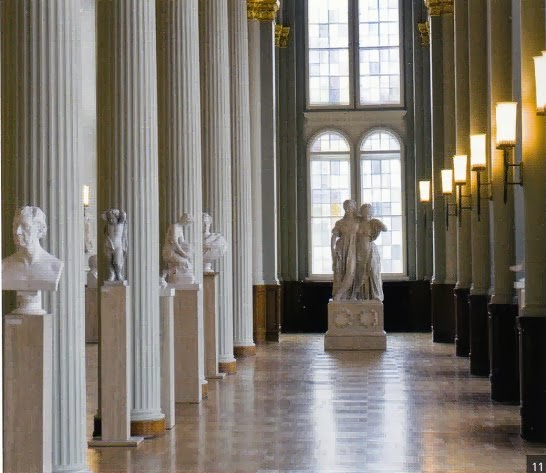 Next is a picture of the Hall of Pillars. This is open to the public and is used for exhibitions. Originally it housed the library of the city government.It was destroyed in WWII and rebuilt in a simpler style while retaining its original colour. It also has a gallery at the top of the room.

It is said to be the most beautiful room in the building, is nine meters high, and has three rows of pillars and columns supporting the cross-vaulted ceiling. I wandered through it as I looked at the current exhibition of busts collected from Berlin state museums to create ‘Berlin in plaster 1790 to 1850’.

I mentioned that the building is a mixture of rooms with exhibits open to the public, but it also has a private section the public cannot enter. These are mainly at the rear of the building and house the offices of the senators and senior civil servants. Of these the prominent office is that of The Governing Major of Berlin. 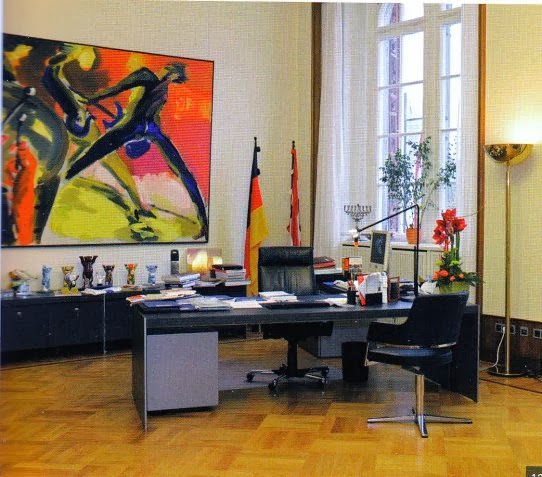 The occupant of that office is currently Klaus Wowereit SPD. I think he is in his third term. Berlin is governed by a coalition of SPD with the CDU. For the Silsdeners: This is like a government of Labour and Conservatives – an impossibility in the UK! Before that he formed a government with die Linke Partei. The Left Party, which as the name suggests is left of the SPD.

Here is a pic of his office. It looks rather sparse and functional. Notice the large painting on the wall above a row of statues of the Berlin Bear, which is the symbol of Berlin. The last time I saw him was at the Abgeordnetenhaus Berlin to take part in a debate.

Before that was at the Kömische Oper where his official car stopped quickly before my nose, his bodyguards stepped out to check if it was safe for him to leave the car. It was, he greeted me, went inside and later gave a good speech!

I hope you have enjoyed this extra post about the Town Hall in Berlin and will add it to your list of places to see the next time you visit Berlin.