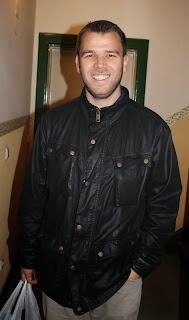 WARNING: Do not read further Alan – this blog contains details of more eating and drinking!!!

It was really great to see Janos again. Last meeting was in Spring. Since then he has been half way around the world, including a memorable holiday in north India. He ‘popped in’ yesterday after attending a conference in Berlin. He looked fit, healthy and happy!

Marcel had arrived before him so we were able to catch up on news and start cooking. Marcel decided on a new version of his now famous ‘Spag-Bol’. Different flavours/spices and way of cooking the ‘Bol’. It was very tasty as you can see from some happy faces with raised cutlery.

It was good that I had laid down enough supplies of different beers. Jan had to dash to the airport at 9.00pm to meet Lady A., but I forced him to take a sample of beers for the journey. Interesting conversations during the meal ranging over many topics most of which we had never covered before.

I smiled as he talked in English – he never uses German with me – then his phone rang and he immediately switched into Spanish to talk to Lady A. after which he answered Marcel’s questions in Hungarian and all without even thinking about changing languages. He has three more languages  he didn’t use yesterday. I think it is called talent!

Marcel stayed after Janos left and so we had the chance to talk a little more. It was mainly about moving to a new flat in the same block this weekend. At least the new flat has better heating and that is important as winter begins to settle in. Keep warm!