Had I continued to live in Silsden, I would have had to gallop to Bradford or Leeds to see concerts or operas. In Berlin, I just have to gallop to the centre of the city and there I have a choice of three opera houses and a number of concert halls.


I particularly like the Konzerthaus Berlin on Gendarmenmarkt. It is between the German and French cathedrals next to U-Bahn station Stadtmitte. Visit it the next time you are in Berlin. I like the atmosphere in addition to the architecture and design of the hall. 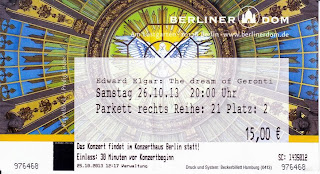 Angelika contacted me in the week and said she was going to a concert there on Saturday evening and if I wanted to come with her. I said yes. It was a performance of Edward Elgar’s, The Dream of Gerontius. It is not performed so often and I had never seen it although I had heard it a number of times.

It was written  in 1900 and there were problems because of some Catholic texts. The Anglican church did not allow its performance so some changes were made and from 1910 it was performed in its churches and music festivals
Last night the original was used. The performers were interesting. The orchestra was the Staatsorchester Braunschweig  (Jan – this is your old uni town!) and the chorus was made up of the Berliner Domkantorie and the Chor für Geistliche Musik, Ludwigshafen. This is in the south of Germany. The narrative was sung by Michael J. Connaire – tenor. He had a very clear diction and so I could understand nearly every word – from his name I suspect he is Irish. It was sung in English and the level was very high for mainly German speaking singers. Well done all. I really enjoyed the evening.