This post is just for Alan. He is my oldest and dearest friend and you know I spent a wonderful few days with him and Lynne and family this summer. He is learning how to use a computer and all the things you can do with such a machine. In his case, it does NOT mean how to spy on other people:-(

He recently sent me one of his famous ‘straight thinking’ e-mails and said half the posts on my blog are about eating and drinking. Alan is not a fan of drinking anything with alcohol, and that is okay. 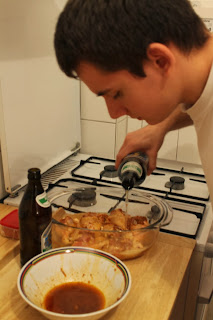 He called me a couple of evenings ago. We had a nice chat and caught up on news. He repeated his comment that my blog is full of food and drink. Yes, Alan you are right, so here is another story and photos 🙂 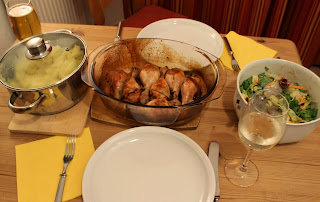 Marcel arrived at 6:00 pm last Wednesday. One hour late. On asking why late, I received the classic student response of, “I fell asleep”. Say no more!  He had called earlier to ask if he could visit and cook something. I immediately said, ‘Yes’.

The truth is that the main reason was for him to pick up his washing. He had also found a recipe on a Hungarian cooking website and decided to try it.

It was a simpler recipe that before. It was based on chicken legs soaked in a mixture of olive oil, crushed garlic and four spices, to which you add beer made from wheat and then into the oven. With this you eat a fresh green salad and you can choose potato or rice. Marcel went for the former.