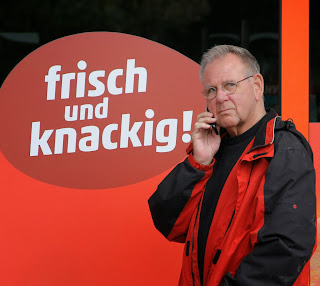 I spent this week settling into life in Berlin after a wonderful week in the south of France. I called Hannelore and Peter. Pleased to report that they are well and Peter’s health is fine.

The morning after my return = last Sunday morning, I cycled to a nearby area in my district. Yes, I know it was Sunday, but a local store in the REWE chain had got permission to open. Why on a Sunday which is not normally allowed here? 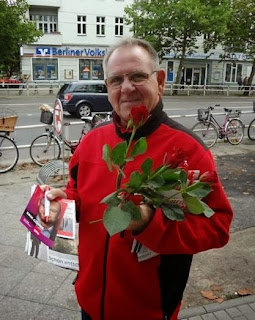 The answer is in order to celebrate 10 years since the store opened. The store’s boss is the son of one of our SPD Oldies. We were allowed to have a counter from which to distribute election material. It was a really nice time, but I was very tired after my late flight and arrival the night before.

Silke turned up by chance and unknown to me took this photo – Marcel had just called me. She later sent it to me with a smile. I like the shot so decided to share it with you. I don’t look tired in the photo and you can see my nice south of France tan 🙂

I have to explain the photo. She deliberately took this shot because of the words behind me.  I was too busy talking to Marcel and did not notice the background. Frisch is like English fresh so no problem there. The word knackig can be translated in many ways such as crisp, crunchy, tasty for food……..but as sexy for people 🙂 So in this photo I am fresh and sexy – oder?

I’ve added another of me taken today. It was posted on Facebook on the SPD Karlshorst site. I ‘pinched’ it. It shows me distributing material on the last day of the election campaign. Tomorrow is voting day. A big day for me as a first time voter.