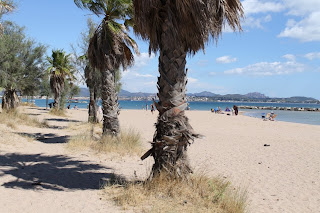 Frejus in a small resort on the Mediterranean Sea. It lies south of the more famous resort of Saint Raphael, but they share the same bay Last Wednesday Peter needed to rest so Hannelore and I set off to explore it.

Of course she knew the area well, but I hadn’t been there before. In bright blue skies and nearly 30°C we set off. We drove south through Callas (nothing to do with the famous singer :-)) then to La Motte, through Le Muy and picked up the road to Frejus.

We landed at a beach with lots of sand, people enjoying the sun and kids playing in the sand. It could have been anywhere in the world. I walked along the beaches, while Hannelore rested in the shade, and took a few photos. 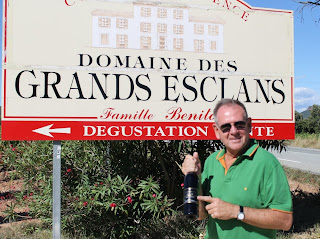 One was of a line of palm trees on the beach. Another was of a palm tree which had two parts, like twins, and another one grew almost on the shore line. I liked the lines they created. I enjoyed walking along the beaches in the sun. I even took off my shirt to get a little more sun as I walked!

Later, as we drove home, I told Hannelore I wanted to buy a special bottle of wine for her and Peter. She said it was not necessary, but I insisted, so she drove me to the vineyard owned by the Benito family. What an experience. You must go to a family owned vineyard and sample all they have to offer before you decide which bottle you want to buy.

I have done this many times and in many countries, but the Benito vineyard was rather special. Service from the owner no less. I selected a bottle of red which had won 3 prizes at an international wine competition. Only the best for us!

Here you can see me at the vineyard with the bottle and the dinner table set by Peter to show the food he had prepared. It is called La Barigoule and has lots of delicious things including artichokes, sword-fish and Thunfish with lots of other things and spices.

We had a local rose wine with the meal, but we opened the Benito Red as we nibbled a local cheese to finish off the meal. Mmmmmh……my mouth waters again at the thought of the meal!