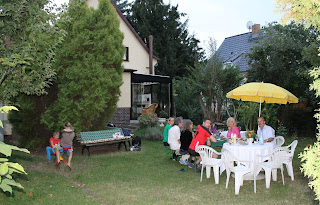 I’ve had a party weekend after a very nice week. Yesterday was shopping then cooking with Marcel. We created an excellent meal of slices of chicken breast cooked in white wine and six different spices.

In addition we cooked three different kinds of vegetables in my wok, then added tomatoes with basilicum. This was eaten with lots of spaghetti. Mmmmh….delicious. Marcel had a second helping!

Later I went to a birthday party shared by a couple who live nearby. Lots of interesting people, conversation and drinks. I stayed until mid-night! This morning I went on a walk through my district led by the Mayor. I learnt a lot about plans for future buildings such as schools, houses, flats.

Later I cycled to Marzahn to a very attractive area with houses standing in large gardens. There was a garden party given by Drs M. and I. P. They own the language school where I sometimes teach. They gave a party for teachers. Many had other appointments so we were a small group.

The quality of the food and drink was of the highest. Real Thüringa Bratwurst!! I put these into my Fish n’ Chips and Pork Pies top ten list! Interesting conversation, active grandchildren and late summer weather added to the pleasure of the event.

I am now packing my bag for the flight to Nice tomorrow morning. I’m looking forward to it.