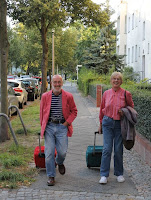 On Sunday morning I called Sandor to say a final goodbye. He said they planned to leave at 9:00am once they could get Marcel into action! At the same time, Neil and Barbara were enjoying a final breakfast in their hotel before setting out for a last exploration of the centre. 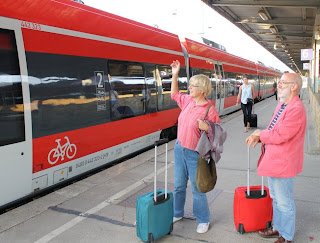 I dozed in the sun on my balcony and waited for a call to say they were coming over. We had talked about having a walk around my tiny corner of Berlin before leaving for the airport. I dozed on and waited.

No call, but I reasoned they had found something really interesting and would ring the doorbell when they were ready. The bell rang just after 4:00pm. It turned out they had been trying to ring me for some hours without success.

On testing my phones it became clear that the problem was trying to get hold of me over a UK based service. We relaxed over a light meal I had prepared before slowly heading for the train to take us to the airport.  The photos show our progress.

Please don’t wait another ten years to come back to Berlin. Now you have met more of my Oldies you have more reasons to return sooner rather than later.  Auf Wiedersehen!