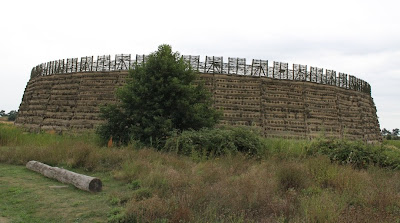 Slawenburg Raddusch is one of forty known fortified settlements in the Niederlausitz dating back to the 9th century and earlier. The area was then settled by Slavic speaking people. Some say distant cousins of Polish and/or Czech speaking peoples.

Germanic tribes had not settled in the area then. They came later. They were busy moving down the Rhine before heading east 🙂  These ‘Slawisch’ people were farmers and herders of sheep and cows. They also built fortifications to protect themselves. They were not alone in doing this in Europe at the time. 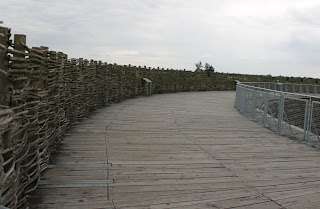 As we approached the fortification I expected it to be made of stone. It wasn’t. It was made of thick tree trunks stuck together with clay. There was water inside the fortification and I guess the locals must have kept a store of food at all times.

There is a museum inside. I read everything including that it was the location of a find in 1984. This was a copper and gold circular plate representing the sun, moon, seasons. It was not the only one. I discovered the idea originated in Greece-Egypt and spread north.

The museum presents a number of themes. How these people lived, the seasons plate, details about life and fortifications, details of the bronze age and settlements spreading from Turkey to Ireland, the things made from copper and gold including armaments.

I found it really interesting and learnt a lot more about the area where I live.What a pity visitors to Berlin will never see such a site. Keep reading my blog to see more interesting places!