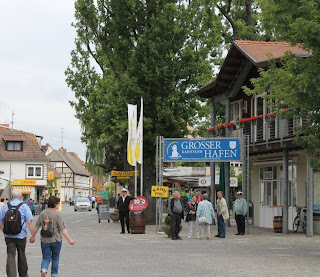 I spent the day in Lübbenau. Okay Silsdeners, get out your map of Berlin and area and put your finger in the middle of Berlin. Move it down a bit in the direction of south east. Good, now you are on the Berliner Ring. 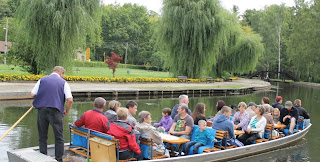 This is a motorway system that circles Berlin. It is rather like the M25 which circles London. Now keep moving you finger south east and you will be on a motorway that runs from Berlin to Dresden.

Keep moving you finger along and you will find the motorway splits. One goes in the direction of Cottbus – and towards Poland. Go along a bit and you will suddenly find Lübbenau. It is considered to be the gateway/centre of an area called the Spreewald. 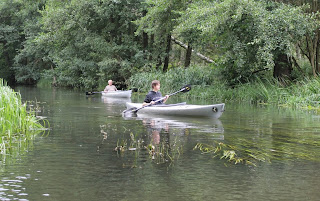 This is famous for its small pickled gurken/cucumbers and the myriad of streams that mark the beginning of the River Spree. This is the river that flows through Berlin. It is equivalent to the Thames and London.

I went there with my SPD Oldies. We meet every Thursday for breakfast, as you know. Gabi is the boss and organises everything. I posted an earlier story about a day out with them in a town famous for its tile production. She organised this day. It was great. 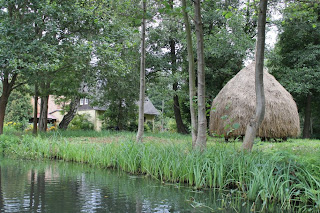 We jumped into three cars and drove all of the 90 kilometres to our destination. I start my photos with a view of some of the gang in the town centre leading to where you pick up the boats. They are flat bottomed and the equivalent are the punts you can steer around Cambridge.

We met for coffee and a chat then got into a punt/called der Kahn in German and off we went for an hours tour around the waters of the area. We then stopped for lunch and a beer. No surprise there!  Then another hour of being ‘punted’ along the waters until we returned to Lübbenau.

The mandatory stop for Kaffee und Kuchen then followed before we got into the cars and headed for Raddusch. See next post!