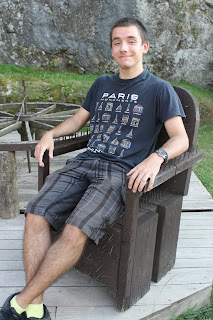 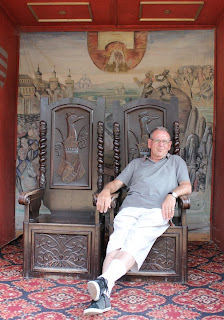 On the way back to Budapest we stopped at another old historical town with a ruined castle. We stopped just to enjoy cooler evening air and take in the views. At this place there were some ‘seats’ used in the ‘Good Old Day’ for torture.

I put Marcel into a couple and threatened to throw away the key. His parents shouted out, “Throw it away!” as other people looked on. Marcel shouted, “No, don’t”. Being an old softy I decided to let him out of the torture seats. I have since wondered if I made the right decision 🙂

Nearby was a replica of an old throne for the Hungarian Kings and Queens. We took away the rope designed to keep the ‘riff-raff’ away, so I was able to take my seat as König Johannes I von Ungarn. 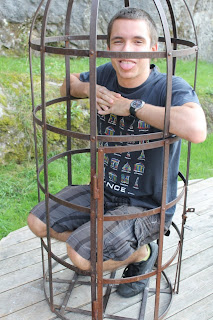 My reign lasted only a few minutes for Marcel called out, ” Move your fat b…t…m  so I can have a picture”. In the ‘Good Old Days’ I am sure I would have had him beheaded for such impudence 🙂

Later, or was it before this trip ?  Marcel had to go somewhere in Miskolc, but we had some time before the appointment. He wanted to show me a little lake near the family house where he had played as a little boy.

We climbed into a rowing boat and off he went. He quickly remembered how to row and really enjoyed it. I enjoyed watching him enjoying part of his childhood again 🙂

Originally I wasn’t going to post these photos for they did not fit into a schematic plan. Later I decided to just add them for the fun of sharing those moments with you. Looking at them again I can see I made the right decision.