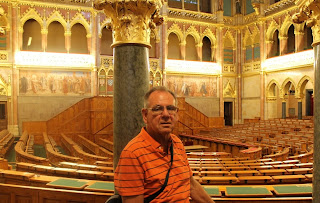 The centre of Budapest on the Pest side is dominated by a large, ornate building. It is the Hungarian Parliament. I have always liked it with other buildings around and opposite on the Buda hills.

We left for Budapest the day after Opa’s party. Time for John to see a bit of culture. I went on a special tour of the building, sailed past it on an evening cruise boat and admired it from the Buda hills. Let’s start with the building.

During the 19th century ruling and business elites were able to wrest more power from the ruling Habsburg Kings to create the Dual Monarchy of Austria and Hungary. Against this background of rising nationalism and economic power, the decision was made to build a ‘Budapest’ Parliament. The other was in Vienna.

A competition for its design was launched in April 1882 by a committee. They accepted offers from five renowned architects. Only the one from Imre Steindl was Neo-Gothic. It was accepted in 1884, because an influential member wanted one like the Houses of Parliament in London. Steindl oversaw the construction work, but died just before it was completed.

Jan would have had a great time if he had been around then! Digging the foundations created lots of problems. Mainly flooding from the nearby River Danube. This was finally solved by building a huge layer of concrete into which the foundations were set.

Most of the material came from Hungary, including 40 million bricks and 30,000 cubic metres of dressed stone. Heating came from a boiler house built next door. Building was not completed in time for the ceremony to mark Hungary’s millenium in 1896, which was held in a section then completed.

In October 1902, government officials and representatives moved into the building and started work. Work on the inside of the building continued to the end of 1904. Final cost was 37,183.943 crowns which was four times the original budget. Building the new Berlin airport has the same problems 🙂