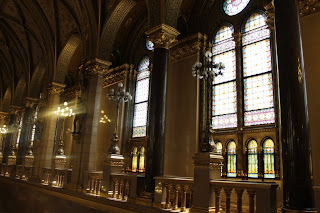 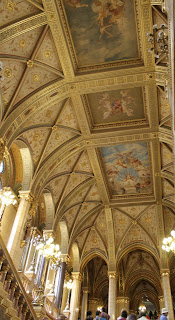 I joined a tourist group to see the main parts of Parliament. It was in English but the lady ‘babbled’ in a strong accent so I hardly understood half of what she said! 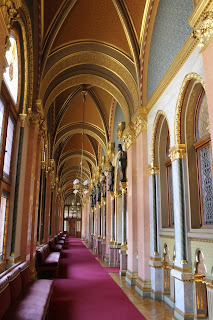 The centre is the Dome which encompassed the Ceremonial Hall. Photography is banned there. Under the centre of the Dome there is a large glass protective case. Inside are the old Crown Jewels including King Stephen’s crown. He lived from 1000 to 1038 and founded the Hungarian state.

Two guards stand on each side. Grim faced and with drawn swords. Try to get to the crown and I am sure you will lose a hand 🙁  No-one tried. The swords looked very sharp! Around the Dome on its arches you can find statues of different Hungarian Kings and Queens.

Like the English Parliament, the Hungarian one is bi-cameral. Left of the Dome you can see the former House of Peers (peers no longer exist)  and right of the dome is the House of Deputies. It is still in use for that is where the MPs sit.

The Parliament is 265 metres long, 123 metres wide and the height of the Dome is 96 metres above the pavement. When completed it was one of the largest buildings in the world. In all, it has 152 rooms.  You can enter it through any of 17 gates, given they are not locked!

Go and see for yourself when you visit Budapest. It’s worth it!