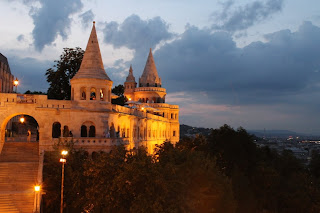 While still in Budapest, we took a cruise boat one evening. I enjoyed seeing the city centre from the river as darkness fell. It was also cool after another warm day. You can take a boat tour through Berlin and you will experience the same. It all looks different from the water. 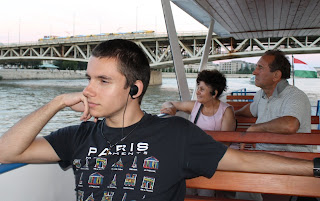 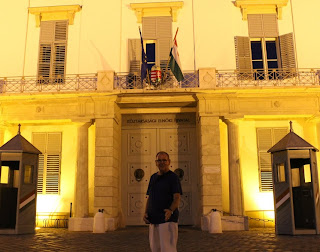 There are a lot of bridges over the Danube. I took lots of photos and like to see them again. I selected only a couple for this story. I include a shot of the family as they listened to the tour over headphones. I like it because they did not pose for the shot.

Later we went for a walk on the Buda hills opposite the Parliament. I discovered the Presidents Palace which includes his office and official residence. Here is a shot of me posing outside the door. The police guards just looked on in a very bored way!

Next day we headed north-east to the city of Miskolc to the family house. They are building a new one in the hills north of Budapest but it is not ready yet. The one in Miskolc is also in hills. Cycling on the flat is much easier folks!