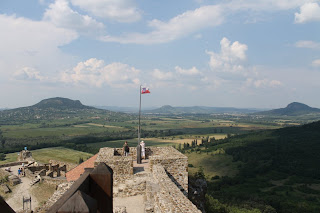 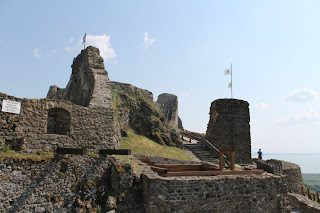 Szigliget is the next small resort west of Badacsony. There is a railway line next to a road that follows the coast then goes inland into the bay before it runs along the back of the mountain at Szigliget.

Next to the road, and rail track, is a bicycle way. We went on that! You can see a photo of Marcel enjoying a ride on the track.  The mountain is 242 metres high and at 229 metres you will find the ruins of a castle. We headed for that.

We climbed towards the summit and noted the castle was built over a number of years. A hole was dug to find a stream under the mountain, but with no luck. Instead, the engineers built a system to store rainwater. Even so, I would not have liked to stand next to a soldier in the middle of summer who had not bathed since who knows when = water only for drinking :-(( 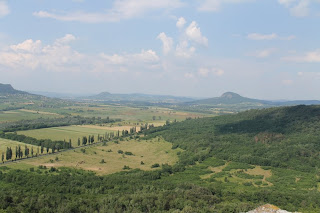 The toilets were also interesting. Just a room with a seat hanging over the side of the castle and a long drop for anything coming out of the body. I wonder if they gave a warning to anyone underneath walking up the track to the castle?

Marcel showed off his skills as a bowman. (See earlier post) He would never have made it into the English army whose bowmen defeated the French cavalry at Agincourt in 1415. I didn’t tell him that. He asked me how he had done. I was generous and just smiled and said, “It could be better!”

We had a small beer break to let him get his strength back, for me to go to the toilet and then to walk up the last stretch of the mountain/castle. The view from the top was superb. A memorable view north towards Badacsony and inland to the mountains scattering the landscape.

Actually, they are the remains of volcanos which formed the area millions of years ago. Many people think of Hungary as flat. This wrong idea comes from the area in the middle called the Puszta. This covers about a third of modern Hungary. It is flat grassland (Alföld) around the river Tisza in the east, but extends into western areas.

Hungary has many interesting scenic faces to offer. See for yourself! Marcel also has different faces. I like this shot of him being a five year old again when we found the children’s playground on the way down the mountain. Nice!