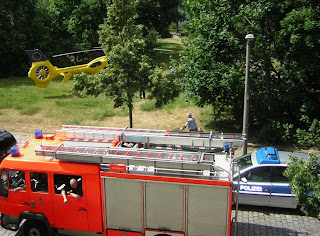 After talking to Hannelore I cycled to my photocopying shop, then to the Post Office and a supermarket. A drama had taken place on my front garden in my absence!

As I cycled home, I noticed lots of my neighbours standing around in groups and looking at a helicopter. In front was a large red fire-engine and nearby were two police cars with officers. 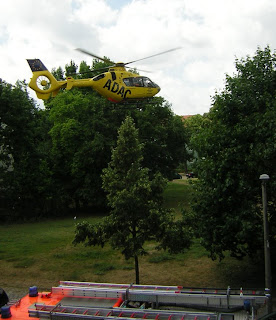 Sitting on my low front lawn fence were four men from the fire-engine. I asked them what was happening and in a good thick Berlin accent one told me there was an emergency. I could see that for myself so I asked him what about.

He told me he didn’t know exactly but they had received an emergency call that an ADAC helicopter had to make a landing in my front garden. He then asked me who I was. I answered in likewise Berlinisch short form that I only lived here, he was sitting on my fence and the drama was taking place in my front garden!

He just smiled and decided to say nothing else. Together we watched the drama unfold. The ADAC is the national emergency service for motorists in trouble, and for picking up accident victims and transferring them to hospitals for emergency operations.

Nothing happened for a while then two men appeared from centre stage right and walked towards the helicopter. They wore the usual emergency uniform and colours and carried what looked like emergency breathing equipment.

They boarded the helicopter. The police and fire engine crews returned to their vehicles and started their motors. The helicopter engine roared louder until it slowly rose into the sky. I took this shot exactly at that time.

As the usual sleepy quiet returned to my front garden, I still didn’t know what the drama had been about, but it was interesting while it lasted 🙂  What a strange morning I had!