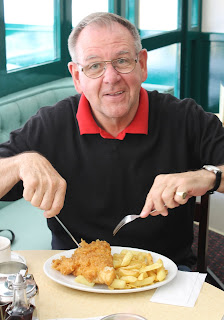 I did not drive straight to Silden from Cambriadge. I went to Skipton in search of pork pies and books. I always go to a bookshop which sells surplus stock. I got a shock. It was closed as were four other shops nearby!  I rushed to the butchers and found it was open. 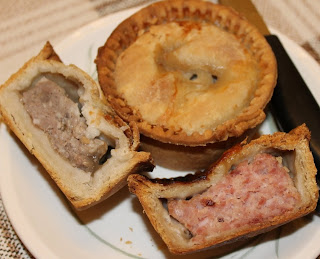 I ordered some pork pies for they were still in the oven. With Fish’n Chips, these pork pies from the family butchers’ in Skipton are the only two foods I dream about when at home in Berlin – and can’t buy them! I miss nothing else about England.

On my return they were waiting for me. I bought a number to share with my family in Silsden. I did as usual. I walked over the road to the churchyard with seats offering a view over the main (market) street.

So I sat there and sank my teeth into the crispy pie crust and into the still warm pork meat cooked in spices and chewed it further to savor the taste again….and again! Mmmmmh!

Here is a pic of some pork pies and one of me eating battered cod and chips in Scarborough where I later went. Just seeing the photos makes me want to taste them again!