Back in Cas-Vegas and in the family home, Lynne showed her mettle in the kitchen. I was just amazed at how food for 12 people arrived on the table and enjoyed listening to all chat and jokes between each and all. 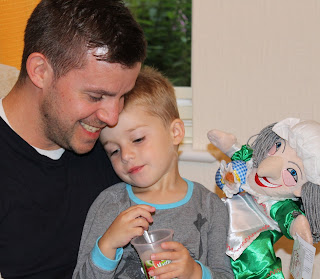 Later I saw something different, but just as amazing. Peter has a four year old son called Jake. It was getting late and Jake was clearly tired, but would not give in. I think you all know the scene. Jake climbed onto Peter’s lap and then said he wanted to hear a story. 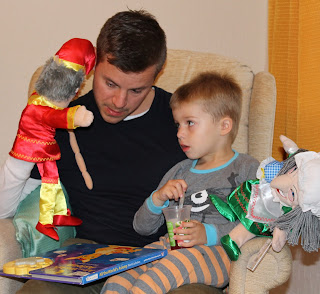 Peter opened the book and slowly started to read. Jake settled further into father’s chest. Peter told more of the story and you could see how tired Jake was. “Are you ready for bed now?”asked Papa. “Not yet”, said Jake. The reading continued,

Jake talked to the puppets all the time and seemed not to notice that Papa was doing all the voices. Finally after lots of persuasion from Punch and Judy, Jake said he was tired and ready for bed. Papa picked him up and gently took him to bed.

I saw the same fatherhood skills in the other sons with Jake and George, who is Paul’s son. I talked to Alan and Lynne about where they had picked up such skills. We agreed that a man has such an ability or not. We decided on nature and biology as the source.