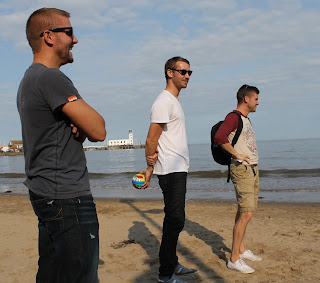 The old Roman town of Castleford is affectionately known as ‘Cas Vegas’ by the ‘Bateson Lads and Lasses’. After helping my family to demolish the pork pies, I left next morning for said town. Alan and Lynne and families were waiting for me.

I got there on time and parked my car. There were lots of things to organise before we all got into three cars and headed out. Destination was Scarborough on the east coast of England. Why?

A good question. The three ‘Bateson Lads’ Daniel, Peter and Paul were in town from Australia and New Zealand. A long way! Yes, indeed but they were there for a special purpose. And prey tell us what that was!

They were all in England to attend the wedding of Paul to Rebecca in Gloucester in early July. Jan and Arancha were also there but I was not. I was booked to fly to Budapest. Daniel had the idea to have some ‘special family time’ in Scarborough because that was where they spent holiday when they were boys.

I was invited because I was in England at that time, I was their godfather and I would not be at the wedding. Sharing such a special time was more than a treat for me. Thanks Daniel for the great idea and driving me there.

We booked into our hotel just behind the huge Grand Hotel which dominates the seafront. Next stop was the most famous Fish ‘n Chips restaurant in town. There I slipped slithers of tasty Atlantic Cod down my throat, in addition to thick cut chips sprinkled with traditional brown vinegar. Mmmmh..can taste it all again!

Wonderful memories of a very special time and with very special people. Here are a few photos to share with you.