Waving goodbye to Brighton I headed north then east then north again. Took me around London until I  found the road to Cambridge. I had already booked a small ‘Pension’ in the suburb of Cherry Hinton in the east of the city. 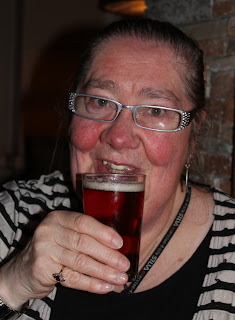 There lives my sister Pauline. I called her from my hotel and we agreed to meet at a pub-restaurant at the end of the road where she lives. I knew she was still recovering from a bad fall which included a broken wrist. She always was prone to falls and accidents. Nothing has changed!

She duly arrived and after greetings we settled down at a table for a meal – and a drink! We exchanged news, details of her family members, and their latest cruise. How strange that two couples in my family started going on cruises when the hit sixty. I wonder why I am not attracted to that kind of holiday?

Due to her falls/accidents she cannot get around as she used to and that is something else we talked about. I added the subject of communication via new(ish) technology such as the internet and e-mails, which they have,  rather that getting into the car and driving somewhere. I got a lukewarm response!

And so a pleasant evening ended and I headed back to my hotel. After a very ‘hearty’ (deftiges) breakfast, which was also the best I ate during that holiday, I jumped into the car and headed north via the A1. I missed the connection road but picked it up later and duly arrived back in Silsden 🙂