I have just returned from the 7th Deutsche-Russische Festtage all of 10 minutes walk from where I live. It runs over three days and ends tomorrow.  The Silsdeners will be asking what it is, so I had better explain.

With the collapse of the Berlin Wall at the end of 1989, many changes were set in motion. One was that German-Russians were allowed to leave Russia and settle in Germany. A lot did this and over the years many of those who came to Berlin settled in the eastern districts, including mine. 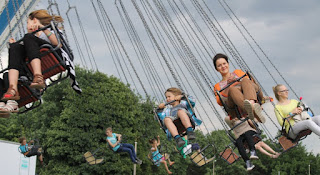 I got to know some as students, or through the SPD. Most are very hard working and keen to build a new life for their children here. They also bring many things from Russia which I like. Some of these are about how they relax and celebrate.

This, of course, usually takes place with music, food, drink, songs and lots of laughter. This afternoon I saw them all. I can only show a few photos but I think you will get a flavour of the afternoon

It is a family based celebration which brings together Russian-Germans with anyone else who wants to enjoy life. It is estimated that about a third of a million people visit the happy event. If you are in Berlin next year at this time then just come along. It is free!