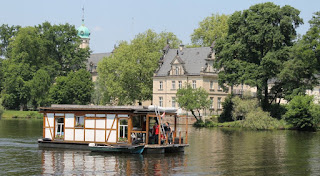 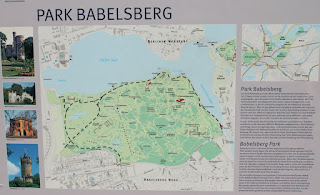 Last Sunday I went to Glienicke. The weather was sunny and warm so Marga and I agreed to spend the day there. I caught a local ‘Regional Train’ and Marga jumped in at her station. We got out at Wannsee and took a bus.

Glienicke is an area south-west of Berlin heading towards Potsdam. It is famous for its bridge which appeared in a number of films. It was the border between east and west Berlin in the old days. Spy films always had spy exchanges taking place on this bridge. I think one of the Bond films has this, in addition to other films. 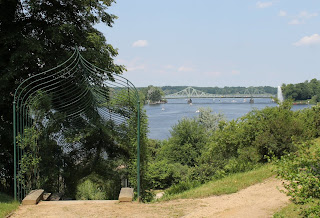 It is part of a larger area called Park Babelsberg. The rulers of Brandenburg, who later transfigured into the Kings of Prussia and then into the Kaisers of Germany in 1871, had a number of buildings constructed in the park. Here are just a few.

It was good to get out of Berlin and just walk around the park and enjoy the views. We also had some nice breaks during and after the walk. The following week was a usual one. The highlight was on Wednesday when I went to the Stasi museum in Lichtenberg.

Please go there if you come to Berlin as a tourist. Most tourists do not know it, or other places of interest in the east of the city. I could write a full report about this on my blog but I have no photos to illustrate it.

Now to find my roller-case in the cellar. Then to pack it over the weekend with things I shall need for my stay in England in the next couple of weeks. I’m looking forward to Fish ‘n Chips in the north and to my favourite pork pies in Skipton.  Mmmmmmh…….delicious!!