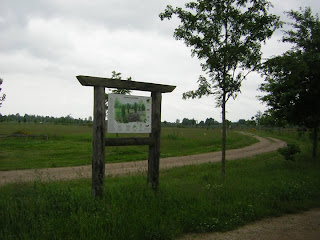 Just got back from trying to ride a bison! What a great day. Let me start at the beginning.

I should have spent six hours today in a workshop. I told you about it in earlier posts. I picked up an e-mail yesterday evening saying it had been cancelled due to lack of registrations. Exactly ten minutes later my telephone rang.

A voice said.”Do you want to join the gang on a walk tomorrow?” I replied in the positive and got details of where and when to meet. This morning, I dressed for cold, rain, wind and set off. It turned out to be sunny and warm:-) 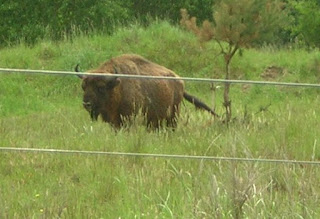 I got on a train at Berlin Hbf and got out at a small station to the west of Berlin in Brandenberg called Elstal. There I met the gang with guests.  It was a gentle 12 klm walk through woods, fields, heather and moors with two stops for coffee. Perfect planning for an ‘Oldie’ walk!

There was a guest from England and one from Finland, and they could not speak German. I suspect that was why I was asked to join the group. Very nice people and it was interesting to switch between languages and listen as some of the German gang used the English they knew – and with success! 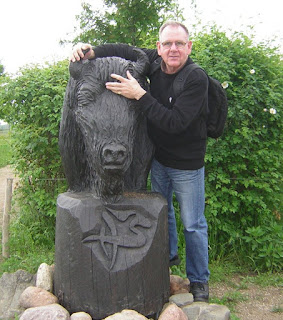 There were lots of animals in a park within the area and I really liked a bison. I called to it, whistled to it and all it did was move a little closer, chew grass and look at me as if I were crazy (no comments please!). More calls and whistles and it came closer. I climbed over the fence, which is absolutely forbidden, and decided to get closer so I could try to ride it.

Bison looked at me with great suspicion and continued to chew. I edged closer….and closer…and thought I could do it. Then at the last minute it threw its head back, bellowed and slowly galloped away. I was disappointed!  I went back over the fence to the bison monument and let an oldie take this photo.

We ended the walk at a family restaurant in the spendidly named small town of ‘Dallgow-Döber’. Typical German dishes and range of beers available. After the meal and lots of talking we caught the regional train back to Berlin. A pleasant ‘multi-cultural’ day for all.