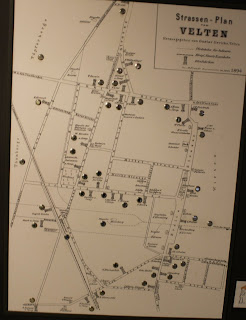 Before we return to Velten let me make a football comment. I think most Germans watched the match on TV yesterday evening from Wembley Stadium in London. I heard in the radio that 150,000 German fans had travelled to London for the event, although not that number had tickets for the game. I guess they just wanted to watch it on big screens nearby and see if English beer tasted better than the last time they visited. It doesn’t 🙁 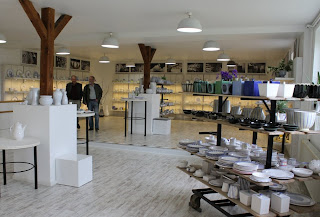 Marga told me that most Germans wanted Borussia Dortmund to win against FC Bayern München. They didn’t. They lost 2:1 with the winning goal scored in the last but one minute of the game. I thought it was a good match, and Dortmund certainly took the game to Bayern’s defenders for most of the first half.

Back to Velten and my adventures there last Tuesday. With the creation of Germany and Berlin as its capital in 1871, there was a rapid increase in population, buildings and each required heating.

Production at Velten increased to supply demand. I think I saw at least twenty factories on the map when I was there. This in turn created a workforce and so the town expanded to house them. And all from ‘der Kachelofen’. 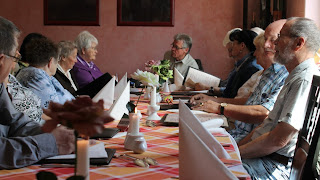 It was time for lunch. Our hostess Frau Gabi Kind had organised a large table at the local Italian restaurant. Here is a photo of her. She is always smiling and is the leader of the AG60+ group of the SPD in Lichtenberg, where I live. I now go to her Thursday morning breakfasts with other oldies:-)  Here is a photo of some of my fellow oldies about to ‘dine’.

Later we drove out of town to a village to visit the workshop founded by a famous designer and producer of ceramics. She died in 2011, but her family continued and expanded the business. I discovered they have a shop in Berlin.  After that, it was time to settle into the cars and head back to Berlin. I really enjoyed the day and learning more about the area I live. Thanks to Gabi for organising it!