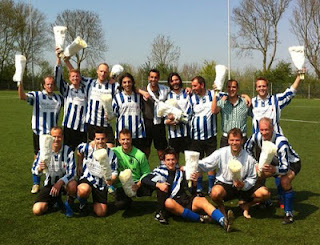 Since my last post I have been very busy. I got a nice call from Marga and we chatted a lot about the football match in London yesterday. I later discovered that liebe Andrea was at the match in London. Wow!  I saw a nice pic of her outside Wembley Stadium.

Her brother Jan is also a champion. He sent me a report in Dutch and a photo just before I flew to Dublin. This afternoon I had time to look in more detail. I could also understand the text for it is relatively close to German. I can hear/read it and understand but I can’t speak it.

The story is that his team won the local football championship in early May. Congratulations all round! They got bunches of flowers as you can see in the picture. He is on the bottom row, second from the right. I bet they sank a few beers back in the changing rooms! Nice one Jan – an extra beer is waiting for you here! 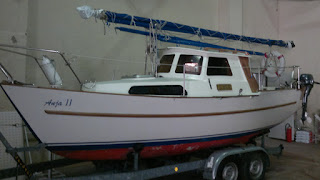 I also picked up an e-mail from ‘Capt’n Bob’. He wants me to help him put his boot into water next Saturday. I can’t for I have a long workshop. Now all we have to do is find another day. His boat is called Anja II. Here is a nice pic. It needed a lot of work on the hull and motor but now is waiting to be lowered into the H20. Looking forward to steering it around this summer.

Coincidence: Wagner was born on 22 May 1813 in Leipzig, hence lots of performances all over Europe for it is his 200th anniversary year. The party that later became the SPD was founded one day later on 23 May also in Leipzig, but in 1863 = 150 years ago. We Germans got a double dose of celebrations last week. Yippee!