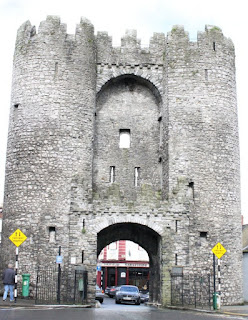 I had a pleasant and uneventful drive on the M7 to Dublin. At a coffee and ‘comfort’ stop I got into conversation with two nice young ladies. One thought my English accent sounded to have German tones!  She came from Krakau in Poland and had had German lessons at school for eight years.

We switched into German and had a nice conversation about her home towm. I have been there twice and can recommend anyone to visit. It is a UN designated Culture City. There are more museums, bookshops, concert halls, libraries than you could ever visit. It also has a really welcoming atmosphere.

Back on the road and challenged by the task of working out how to get to Jarlath’s house in the north of Dublin near the beach. I decided on the M50. This takes you from south/north on the outskirts of the city. It is a toll motorway but not expensive. I left at the right exit and just kept driving east. I only had to stop once to ask for directions and that was a mile from his house. Not bad! 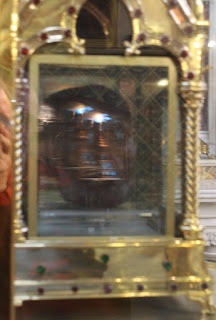 I duly arrived to find him about to eat lunch with a friend from Egypt. Nothing like getting to know Multi-Kulti people!  I didn’t join them but I had to tell them about my adventures over the last few days and how I had found the house without having to telephone for help. I told them a nice story as they ate! 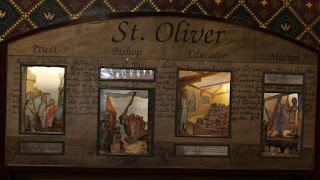 I also said I wanted to go to Drogheda (Droichead Atha). This is on the coast north of Dublin. They agreed and we piled into my Fiat. The weather was also warm(ish) with blue skies. I really enjoyed driving there.

On landing in Ireland with his army, Cromwell attacked an Irish army based at Drogheda. It was a massacre and he almost destroyed the town. From there he headed south and met the main Irish Army. Sir Philip O’D and his men were part of that army. They were heavily defeated with huge losses. I had to see the place before I left.

We got into the town centre and celebrated with coffee and cakes in a cafe next to the Cathedral. From there we wandered around the old city and went into the cathedral. The building did shake as I entered but did not fall down!  The place is famous for having the head of the now ‘Saint’ Oliver.

Apparently he was a priest who preached many things including Irish independence. The English sentenced him to death. This was duly done via the old standard practice of ‘Hung, Drawn & Quartered’. Somehow, what is claimed to be Oliver’s head ended up in this cathedral.

What a load of old rubbish!  This is a fairy tale on the level of anything coming out of Hollywood!  I think the head looks to be made of plastic and I loudly said so. I got some strange looks from ‘believers’! Some people will believe anything.

I know a women in Berlin who fervently believes that E.Presley is living on the moon with M.Jackson – she is not in a mental hospital! I jest not!