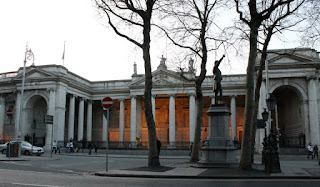 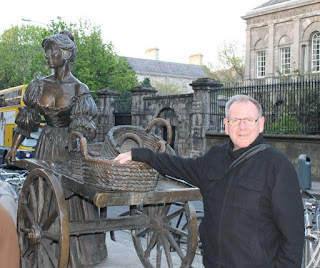 We crossed the Liffey via O’Connell Bridge and headed towards Grafton Street. The area is a traffic-free and full of pavement artists, pubs, cafes and curio shops.

There is also the famous statue of Molly Malone who as the song goes, ‘ wheeled her wheelbarrow through streets broad and narrow’. Legend has it she sold fish but I heard the locals call her, “The tart with the cart.”  This means she sold more than fish!

Walk a little further and you come to a building which now houses the Bank of Ireland – above.  I was told that it was originally built to house sittings of the Parliament during British Rule. It  now plays host to bankers. They are now as unpopular there as anywhere else! 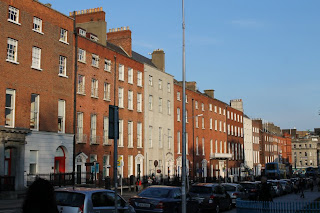 All over the city centre you will find old terraced houses from the British time. Here is a shot showing a typical row – on the right.

One unique building is Trinity College built across from the bank and standing in almost 2 square kilometers of land/garden. A nice place to study in! It is on the left.

Walk along Nassau Str. and turn into Kildare Str. There you will find an interesting complex of old buildings.  See my next blog post!