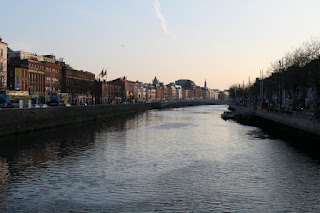 I got through airport checks and emerged into a cool but bright Dublin day. I met a friend of a friend who was to be my guide in Dublin. We took the hospitality bus to Herz and picked up my car. As I reported before, it was not the little Ford I expected but an older Fiat Panda. I know how to drive one for sister Pauline has one! 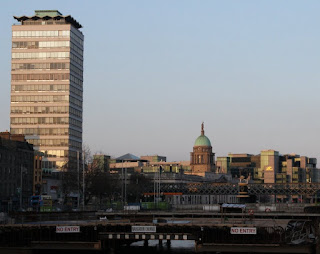 I drove south to the coast where we stopped for a welcome walk on a windy sandy beach. I then went to his house near the coast for tea and a rest. After dozing for some time and more tea I felt better. We took a bus into the centre and my guide starting telling me all about the buildings I passed. 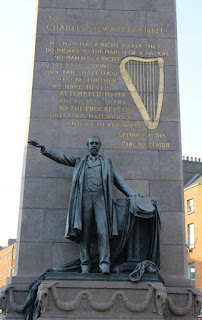 His name is Jarlath and he wears two powerful hearing aids. Even so we had no problem to communicate. He even said I was easy to understand for I spoke clearly and slowly :-))  Dublin was founded by the Vikings as a trading port. It is cut from west to east by the River Liffey. The centre spans both sides with the major government buildings and Dublin Castle south of the river.

Parnell Square and the famous (1916 Easter Rising) General Post Office are on O’Connell Street which runs north to south, crossing the river and ending at Trinity College. Parnell Square has many fine old buildings and The Writer’s Museum.

O’Connell Street, with a width of 45 metres, is the widest street in Ireland. It is named after Daniel O’Conner 1775-1847 who was one of many fighters for Irish independence.  It is full of statues and plaques to people and events linked to independence. We started our tour there and moved south