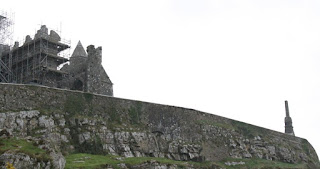 Cashel played an important role in family history. Sir Philip O’Dwyer made the tactical decision necessary for the capture of Cashel in 1641 during the ‘Desmond Rebellion’, but strategically it was a mistake. He held it for seven years and imprisoned the English garrison soldiers. The family barely survived the English retribution that followed. Later he made the fateful decision to put his soldiers into action with the Irish army against Cromwell.

Big mistake! Result was no chance to repeat it ever again!! Land taken away and gunpowder under the walls of the castles ended their function. A gamble that did not pay off – but then we make them every day. Even so, few of us rarely pay such a high price.

On my birthday I drove into the town of Tipperary south of our old lands. It was smaller than I thought. We all know it from the First World War marching song. ‘It’s a long way to Tipperary, it’s a long way home’. Perhaps that is why I expected a larger and louder town. I also didn’t hear much singing 🙂 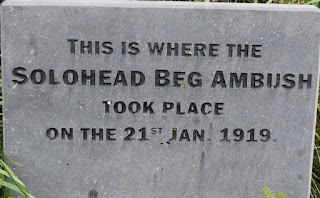 I found a really nice B&B in the centre of town. It was owned and run by a lady called Moira and all of a couple of years older than I! After a needed wash, I drove to Cashel. I had to see it on my birthday given its family importance. Nice drive though green lush countryside and I made a stop at a place called Golden with a large ruin near a river. 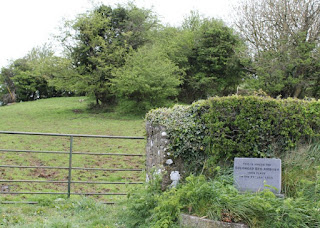 I visited the famous Rock of Cashel. It is on most tourist lists to visit and I saw many tourist buses and heard many languages when I was there. A large fortress was built on the rock which overlooks the town and which protected ships/trade on the nearby River Suir. It was under repair when I visited as you can see.  This river also formed the eastern border of our lands.

On my way I saw an unexpected sign. It was to the Solohead Ambush. It happened in 1919 when a group of Irish nationalists ambushed some British soldiers transporting dynamite. It was taken to Dublin and used against the British in the conflict there. Just one more example of turning a corner and finding yet another memorial to the independence struggle.

That evening I had a very nice fish meal in a restaurant recommended by Moira and later fell asleep reading a novel in German I had brought with me. And so ended my last year of 69 and the first of 70!