Yesterday I went to Dahlem with Marga. I took the regional train from Karlshort to Charlottenburg where she lives. She met me at the station. We then walked to Kurfürstendamm to catch a bus. It duly arrived and we sat upstairs. I sat at the front like an 8 year old boy and took in all the sights. Marga sat behind me and just smiled!

We finally arrived at Königen-Luise-Str.. and got out. The whole area was new to me for it is in the deepest west of Berlin. I know more about the deepest east of Berlin!  Marga made a direction mistake but it had some advantages. We walked past the museum to the Berlin airlift at the end of the 1940s. If you know your history you will surely know that Herr J. Stalin in Moscow ordered a ban on the land transfer of goods to the allied army divisions of Berlin later called West Berlin. 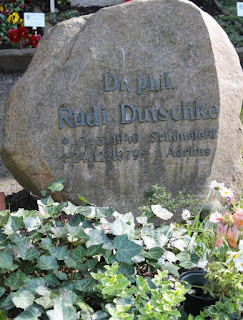 That was the problem. The solution was to fly everything into West Berlin, hence over one year of the Berlin Airlift. Herr Stalin gave up later when he noticed his ban on land transportation was not working. Clever of him to note that! See the photo of the aircraft – it is an English plane developed in 1946.

Not far away was an interesting monument to the day when the Berlin Wall came down. In case you have forgotten, it was in November 1989.  An American artist created this and for some reason unknown to me, she depicted a bunch of horses jumping over a wall. Marga and I talked about this representation for some time.

We later walked to the old village church. Marga told me about the shooting then later death of Rudi Dutschke and he was buried in the local graveyard. If you remember your local history you will know he was the leader of a student left wing protest movement in the late 1960s.  We quickly found it. See the photo. I noted that he was three years older than I am – and had the same academic title!

We later walked to a restaurant with a large garden in which almost all customers sat to enjoy the sun and blue sky. We enjoyed a tasty fish dish washed down with a glass of Chardonnay. We also had some interesting discussions including my problem of being 70,  plus relationships with two ladies who have ended contact with me. Thanks Marga for your comments and advice.