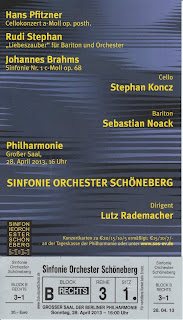 I went to a concert at the Philharmonie yesterday afternoon. It was given by the Sinfonie Orchestra Schöneberg. This is a district in the southwest-centre of Berlin. It is an amateur orchestra of music students, school music teachers and talanted no-professional musicians.

Supporting their concerts is now part of the annual pattern of life here. I became part of Wolfgang’s ‘Music Gang’ some time ago. It is nice to meet up, exchange news, enjoy the concert and cheer on the players. The main surprise was the performance of Hans Pfitzner’s Cello Concert in A.minor op.posth.

He wrote it in 1888, when he was 19 and studying music at the Frankfurt-am-Main Music Conservatory. It was played for the first time in 1977! On hearing it I could not believe it had taken nearly 90 years to appear in a concert hall.

It is described as late-Romantic with a ‘ Brahmsien feeling’. He called himself an anti-modernist. What surprised me was how he managed to integrate the almost intimate sound of a cello led string quartet within a concerto, particularly in its soothing end. I must add it to my collection!