After stretching and relaxing with Kerstin’s Oldies this morning, I left for my Oldie Photoshop Gang led by Stefan. Three were missing due to health problems. A smaller gang hit the computers after the usual period of coffee, cakes and conversation. 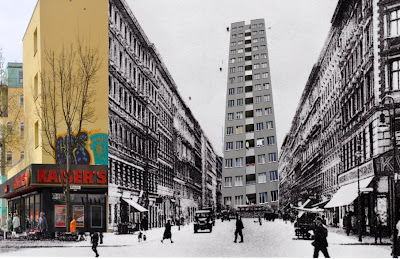 Stefan had prepared some black and white images of ‘old’ Berlin, plus some of new/modern Berlin. We cut, copied. reduced. moved and made many mistakes in the process of creating new images. Here is my work of art.

I then rushed back to where I live and a really nice cafe called Paulina opposite the S-Bahn Station. I arrived at 4.00pm, as arranged. I met Hannelore who flew into Berlin on Wednesday night from Nice where she now lives.

She arrived to attend the 50th anniversary of her ‘Abi’ class (High School Certificate/Graduation) which takes place tomorrow. She arrived with Monika, a school friend who by coincidence lives 6 minutes walk from my place.  We are meeting for a long breakfast on Sunday. Looking forward to it!