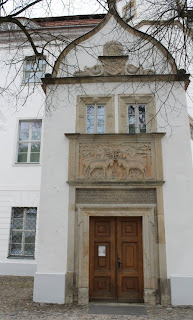 Next leg of our walk was to Jagdschloss Grunewald built on the south side of the lake. More background for my Silsdeners: Our old friend Kurfürst Joachim II Hector ordered that it be built in 1542/3. Das Jagdschloss means Hunting Lodge in English.

He apparently wanted such a place for hunting weekends when he galloped down the Kudamm on a Friday – then back again into the office on a Monday!  Another reason was that he used it to house his new mistress and their children. Not a bad life being a Kurfürst! I bet he would have bought old Mercedes cars if they had been around 🙂 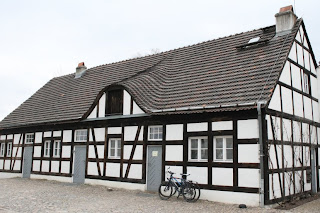 The building was rebuilt in the Barock/Baroque style on the orders of Kurfürst Friedrich I, also known as König in Preußen when he was there. The bricklayers and others jumped into action and it was finished in the style we can see today. See photo. There were some changes made about 1900 such as installing bathrooms and water toilets, but this did not change the external appearance.

It passed into the hands of the state in 1919 following the end of the monarchy and became a museum in 1932. It is now a museum and art gallery showing paintings by Lucas Cranach, and others, but many were looted at the end of the war in 1945. Another claim to fame is that it is the oldest surviving Schlossbau in Berlin. And all this on a nice days walk!