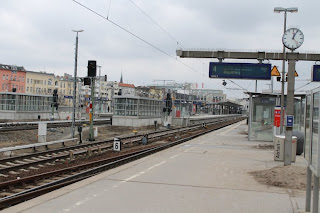 Yesterday I took a regional train from my local station to Charlottenburg station. See the photo.  Marga was waiting for me in the relative warmth of the underground connecting passages. We had decided to get out of our respective quarters of Berlin and breath some winter air in the woods. 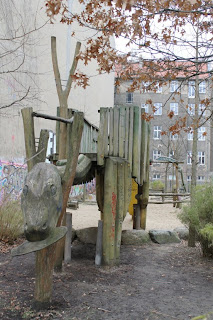 We walked down to the Kudamm to get the bus to our destination. For the ‘Silsdeners’ reading this, I shall try to give you some descriptive detail as I go along. You are probably asking what a Kudamm is. Back in the 1540’s a man with the title Kurfürst Joachim II Hector decided he needed a road to get  from his Stadtpalast to a new place he was having built in the woods to the west of Berlin.

This track/road was then called Knüppeldamm. Don’t try to translate the first word 🙁 but the word damm you can translate as road or track or carriage way. Over time the people called it Kurfürstendamm probably in memory of  the man galloping up and down it to get to his new hunting lodge. Berliners don’t like to say anything long if they can shorten it, so the name of the road became Kudamm. Now you know! 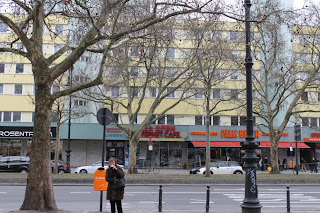 In 1871 a new country was created in Europe. It was called Deutschland or in English it is known as Germany. The first Kanzler/Prime Minister was a man called Otto von Bismarck. He decided the Kudamm didn’t look grand enough for the capital of a new country so he ordered it be changed. It duly was,  including widening it to 55 metres. It was modelled on the Champs-Elysees in Paris – which is actually double that width!

So, Marga and I arrived at Kudamm. We passed a childrens playground on the way and I really liked the animal lurking there 🙂 See the photo.  We took a bus from a stop directly opposite the building where I used to teach. The school is now located in Alexander Platz. What a  coincidence to start the adventure from that spot.