What a boring evening! I watch TV about twice a week and only from 10.00 pm. I have channels which show the same rubbish from 8.00 to 10.00 pm. Either German or American series. Hello – I do not watch such idiot series! No-one is listening!! 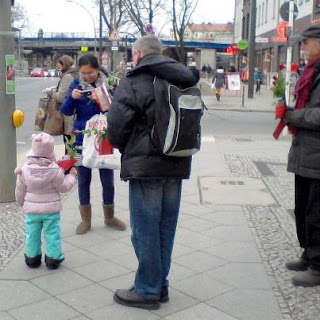 I watched the news and tried to watch a political panel debating energy pricing and policy. I swear that I tried my best. It was worse than boring and an insult to a half educated watcher/listener so I just turned off the TV.

I switched to my computer and caught up on political postings in my area. I got a shock! One was a story about Women’s Day on Friday 8 March. I spent the afternoon with two ‘oldies’ preparing 500 red roses with SPD advertisements.

I then joined them in handing them out to women at a crossing near my local S-Bahn station and shopping centre. I did not know that someone in the SPD had taken a photo of me. Here it is. You can see me from the back. Actually this is interesting for I have rarely seen myself from the back. I think you have also not seen yourself from the back! 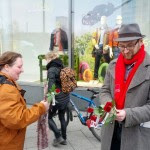 It was minus 5°C but we ‘oldies’ got on with the job. One women I talked to came from a Vietnam background. She was delighted to get a red rose. I then noticed she had a little daughter so I gave her a red rose. Mother was so pleased she took out a mobile phone with a camera and took a photo of her daughter with a red rose.

Great that mother and daughter were so happy and I think you can see this in the photo. I/We did not know that someone from the SPD had taken a photo of the event. What a nice surprise!

The man in the red scarve handing out red roses in the other photo is Erik Göhrs. He is the SPD candidate for the German Parliament from the area where I live. We are working to get him elected.