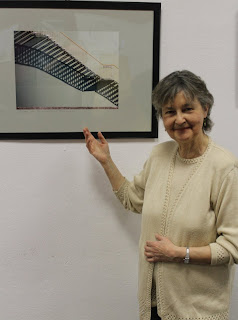 No, this is not the Angelika who plays viola in the orchestra whose concerts I regularly go to. This is Angelika the Artist. I met her through the AG 60+ group which is part of my local SPD organisation. She is 80 but looks much younger and is very active in many groups including hiking. Amazing! 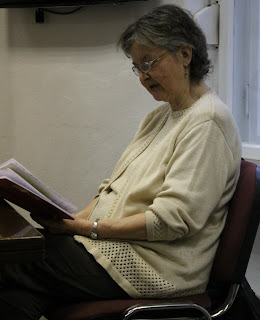 She had a successful career as a stage and clothes designer for theatre, film and then TV. She gave a presentation of her work in a local community centre. It was so successful that it was extended and part of it moved to the centre where I go for ‘oldie’ and some party meetings.

She is also a hobby photographer and some of her work was presented last Monday and will be shown for a month. I was there and took my camera. I took a series of shots and showed them to her this afternoon when I returned for another meeting. She was very pleased with my work and some of my shots will now be used to promote her exhibition.

She also gives readings from her diaries which are being organised into a book. She can play with the language and sounds like a professional actor. I could listen to her reading about her life for hours! I wonder if she could have been a singer? What a model for all who hit retirement age!