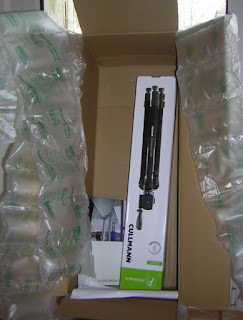 At last it arrived! About six weeks ago, Silke said she had found a good tripod for me online. She also said she had bought other things from the company and was happy with their products. I agreed for the price was lower than many other products we had seen.

Not being up to online ordering and paying – yes; I still only pay cash! – she said she would order and pay for it. I would pay her when I had it in my hands. So far so good!  She went online and filled out the order form. She made a mistake!

She put down my street but the wrong house number! Yes, there followed weeks of trying to find out where the thing was. Mr Mobile Postie did try to deliver it to the address she had written. It ended up in a post office somewhere. Lots of contacts and sending out the right address and yesterday I got a letter asking me to pick it up at my local post office. I think they had given up on trying to get it to my door.

I duly joined the queue this morning, after looking at real blue sky, and was surprised to be presented with very large long box shaped package. I told the Mrs Postie Lady that it was only a tripod and not the leg of an elephant. She just smiled. She had heard it all before.

I left my bike at the post office and carried Elephant-Leg-Packet on my head. Many strange looks and smirks, and I am sure I heard a few comments such as. ‘Wot’s e got on is ed.. an elephant leg oder wat?’ On arriving home I attacked the package with a knife. Here is the result!

Why o’ why did I have to carry an elephant leg package on my head when all it contained was a small package! Here you can see for youself. The final packet was about 20% of the total package. The rest was air and air-filled packaging. Grrrrrr……!