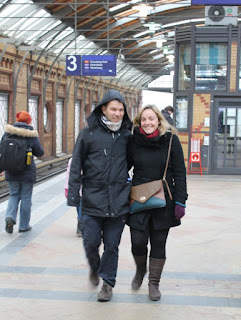 Recently returned from seeing two of my favourite visitors to Berlin. Yes, you guessed correctly. Jan and Arancha. They came for Jan’s mother’s birthday and arrived yesterday evening. Stayed at sister Andrea’s flat and after a lazy and late breakfast decided to get into motion.

They called me from the airport yesterday evening and agreed they would call me when they entered the day. I know them well enough not to plan anything the evening before:-)  And so they called me and we agreed to meet at 2.00pm. Later I got an SMS to make it 2.30pm. Nothing has changed! 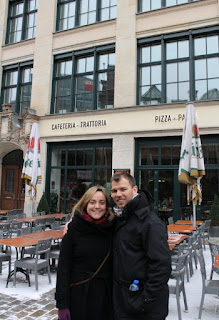 So I went to S-Bahn Hackescher Markt and waited for them on the platform. They duly arrived and I took a shot of the happy couple. They actually did look very happy, relaxed and healthy. Jan had a slight suntan from his recent skiing holiday which went well with his short blonde beard! Arancha looked radiant after her trips to the north of Italy and academic conferences.

We decided to look around the Markt and I told them I used to work in two buildings there. I took a shot of them against a building painted yellow. It used to belong to The British Council and I worked in the Teaching Centre for years. It was closed as the emphasis moved to China and new teaching programmes there.

The other was of a building opposite. This is where I found my first teaching job in Berlin. The school had two floors in the building owned by a publishing company. It had been founded by a group of ex-academics from Humbolt University. I immediately felt at home.There is now an Italian restaurant on the ground floor – as you can see in the photo.  Happy memories of a time when all was new in Berlin and before I met Jan and his family.

We settled on a restuarant under the railway bridge. We caught up on latest news while sipping some beers, or in my case a glass of red wine with veggie soup! We talked about future plans for I would like to visit them in Den Haag. Now I have a better idea of who will be where at what time.

We left to head east. Me for my home and they towards mother’s where Kaffee und Kuchen und Abendessen was waiting for them. Wonderful to see them again and looking well and happy. They really made my weekend!