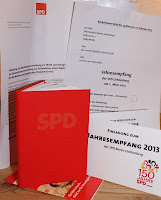 I have a new title. I am a Genosse (comrade). When I moved to my present flat I had to join the housing association which owned the property. No problem. I joined a Wohnungs-Genossenschaft and told people I was now a Genosse.

They smiled and said, ‘Yes’ in a way that said,’Yes and No’. I asked a few people about this and they said this form of address was usually used in a political sense and not for being a member of a housing association.

At the end of January 2013, I joined the Sozialdemokratische Partei Deutschland. In short the SPD. If you remember, I posted information on my blog last September that I would look for a political party after becoming a German citizen.

I spend a number of months attending meetings in two parties and finally chose the SPD. I now have a membership book and card. I was also invited to a wide range of meetings and events in the last few weeks. Lots of things to learn. Welcome Genosse John!