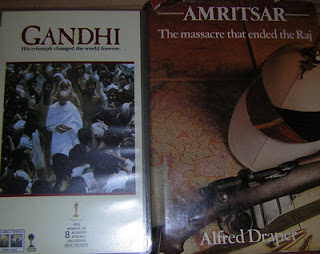 In a short time the television station ARTE is to show the Richard Attenborough film called Gandhi. I read it and groaned -again. The film blurb says it is a biography from 1982. I am in it for a few seconds and as a face in the crowd!

The film opens with Gandhi’s funeral procession along Jan Path. In the background is Rashtrapati-Bhavan = The Presidents Palace. I remember shuffling into that area in autumn 1981 and standing on the left side of the street as you see it from the camera angle. My family connection with India does not begin there. 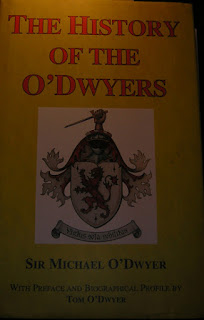 In 1919, great uncle Sir Michael O’Dwyer sat in Lahore and ruled Punjab as Governor-General. He received orders from the government in New Delhi not to tolerate a wave of strikes and unrest in support of an independent India. He called his military boss General Dyer and told him to stop a demonstration planned in Amritser. It was in Jullianwallah Bagh, a large open but walled-in market/garden area in the centre of the city with only one entrance and exit.

General Dyer set off with troops, armoured vehicles and machine guns and confronted thousands of demonstrators in the garden. He ordered his troops to open fire. It was a massacre. Many people died. It has been called the beginning of the end of English rule in India. I think there is some truth in that claim!

Uncle Michael was sent back to England where he lived a nice life with his wife in their villa in Surrey. With little else to do, he researched then wrote a book. It is the history of my family and how we lost our lands, estates and castles in a district of Tipperary. I have read the book and made notes to guide me when I tour the area at the beginning of May this year.

Many years later an Indian man joined his staff and when there was a meeting with leading politicians in Sir Michael’s house he took out a pistol, killed Sir Michael and a few others. He was later hanged and at his trial it was discovered that as a child he survived the massacre in 1919. It was his revenge. Now to watch the film again!