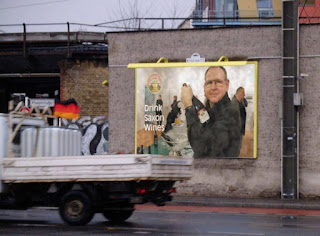 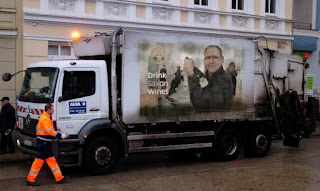 Silke was on her bike heading somewhere and found these new placards of me used to advertise red wine from Saxony. Oh, no! Now I am on the side of a ‘Müllwagen’ – Refuse Truck! 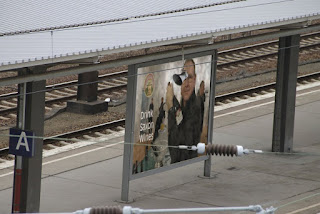 I am sure I know where all the locations are. So far they have been found in two districts to the east of the city. That makes sense for this is where people originally from Saxony mainly now live.

The railway platform advert is on the Lichtenberg line and the othe is near to S-Bahn Rummelsburg. I used to work nearby, so I recognised it immediately. At least you can see a bit more of the city, Frances and Barbara 🙂

I believe the adverts will continue until the end of February. Although I could not buy a luxury car, at least I got some money and used it to cover my Dublin costs. Think positive!