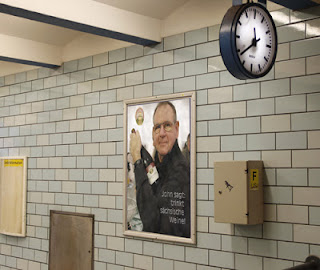 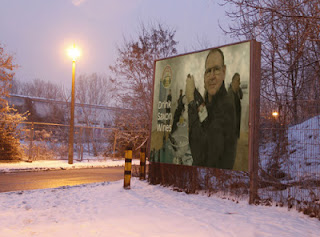 Just look at my last but one post. It was about the photo of me with a bottle of red wine from Saxony. I told you it had been taken by Silke at the Saxony Photograph Exhibition. See that post.

I also told you that Silke had been in discussion with an advertising agency and they accepted the first image to put on a placard. We found that and I told you where it was in Berlin.  See that post. I also said I was wondering whether to buy a Bentley or a Rolls-Royce. A nice idea! 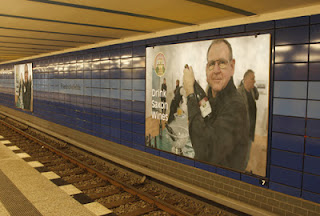 I decided on a Rolls-Royce given my age, and that the car looks like an up-market large SUV, but now I am not sure. I met Silke yesterday evening at an event at the Town Hall and she said she was still in discussion with the agency about how many placards they could use, and the price for each one.

She also advised me to cancel the Rolls-Royce for it would appear I would not be a new millionaire given the details of the advertising contract. It seems that I come last on the list of payments after a lot of other people. Even Silke will get more than me when the pay-out starts! Why do I get the least when I am on the photo/image?

Here you can see more images of me, and the wine from Saxony, on different placards in different S-Bahn and U-Bahn stations in Berlin. When do I get some money?