Each state in the Federal Republic has a building in Berlin called a Landesvertretung. Think of it as a kind of embassy for there is nothing comparative in the UK, and many other countries. Silke was invited to the Sächsiche Landesvertretung and asked me to join her. I agreed immediately.

Why? Silke is registered as an official photographer with various organisation and groups. That is why she was invited to the Fotoausstellung 2012/Photo Exhibition called, ‘Sachsen erleben’. Last year there was a competition organised by the Saxon Journalist Association / sächsischen Journalistenverband. 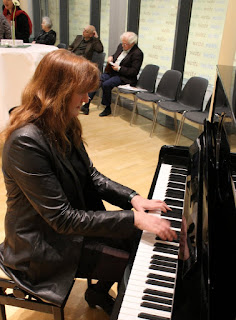 Member photographers were invited to submit photographs and a panel chose the best. These were on display yesterday evening. We arrived for the opening at 7.00 pm, mingled with other guests and wandered into another hall to see a large table set with water, juice, white and red wine. All produced in Saxony. 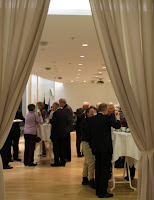 Being a cool evening (only -11°C outside!) we decided on a glass of red wine. The ideal choice. Silke rolled her eyes in pleasure as she took a sip. I followed. We looked at the label. Neither knew it, so came to the conclusion that the best wine was reserved for ‘special occassions’, and we had arrived in the right place:-)

There were speeches, snacks, and a very nice lady played the piano as we guests mingled, ate, drank, smiled, and exchanged polite greetings – then Silke and I had another glass of the delicious red! Took some photos, admired the work of the professionals from Saxony, then left for another appointment. More of that in my next post!