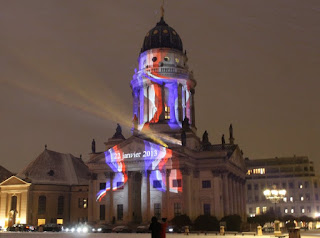 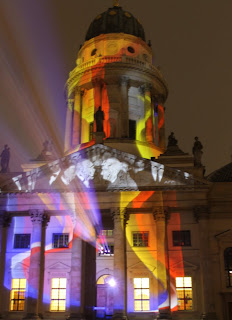 Silke and I headed off for an event to celebrate the Elysee Treaty. This was after we had persuaded each other to have another glass of the delicious red wine in the Saxony Exhibition. We told ourselves it was needed to keep out the cold!

We went two stops by U-Bahn to Stadtmittte, emerged into the freezing night, walked across the road and arrived at Gendarmenmarkt. This is a large square in the middle of Berlin off Friedrichstrasse. It is dominated by The German Cathedral on one side, and The French Cathedral on the other. 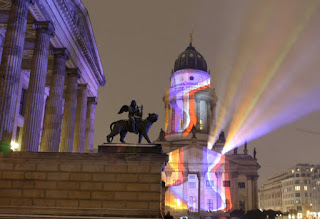 In the middle of the square is das Konzerthaus. I am going to a concert there next Sunday at 11:00 am and then for lunch nearby. They were all built around the same time and are on the list of places to visit  for all tourists to Berlin. It is a popular place in summer when the sun shines.

Yesterday was the 50th anniversary of The Elysee Treaty. I can hear some people in Silsden asking what it is. On 22 January 1963, Konrad Adenauer, Chancellor of West Germany met Charles de Gaulle, President of France in Paris. There they signed a Treaty of Friendship which set the seal of reconciliation between the two countries.

The treaty has shaped French-German relations at all levels ever since, and was celebrated by a light show on the two cathedrals yesterday evening. Silke wanted to record it by taking photographs and I happily went along. I had some problems with settings and darkness, but managed to get a few shots. Here they are to mark the founding of a remarkable and far reaching agreement many years ago.